Those who love character-driven stories; where the eight principal characters are lovingly and compassionately drawn, and who get under your skin as you read.

I felt that I too lived in the small town of Holt, Colorado. I came to know the people who lived there, and think of them as friends — especially Harold and Raymond McPheron (elderly bachelor brothers) and Victoria Roubideaux (the pregnant teenager they opened their home to).

Some of the most beautiful and poignant moments in the book are in the brothers' interactions with Victoria; when they attempt to make conversation with her by telling her all about the stock market and share prices; and when they sit with her and comfort her when she is in labour. It's very moving, but funny too!

The book is not sentimental or melodramatic in any way — instead it's a lovely portrayal of grief, bereavement and loneliness tempered with kindness, caring, and a sense of community.

Plainsong is actually the first in a trilogy, so it may whet your appetite to read others. Each, however, is a standalone book with very little character overlap.

Kent Haruf died in 2014, so won't be writing any more books for me to read! Some might find his lack of quotation marks irritating, but I thought it helped the story to flow more smoothly. 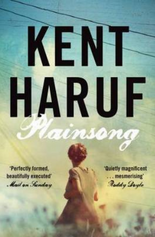 Cherie has read a large number of BDS titles through her book group and her role on the BDS Book Selection Committee. She is particularly keen on character-driven fiction, dystopian fiction and also those with darker themes.