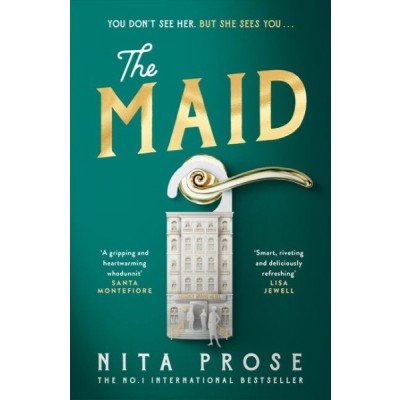 Molly the maid is all alone in the world. A nobody. She's used to being invisible in her job at the Regency Grand Hotel, plumping pillows and wiping away the grime, dust and secrets of the guests passing through. She's just a maid - why should anyone take notice?

But Molly is thrown into the spotlight when she discovers an infamous guest, Mr Black, very dead in his bed. This isn't a mess that can be easily cleaned up. And as Molly becomes embroiled in the hunt for the truth, following the clues whispering in the hallways of the Regency Grand, she discovers a power she never knew was there. She's just a maid - but what can she see that others overlook? [Taken from book cover, Harper Collins Publishers]

"This is such an enjoyable morality tale."

"The love that her grandmother showed in trying to teach Molly to cope is shown tenderly by this writer."

"Molly is a female Forrest Gump and non-the-less appealing for that."

"A story that would appeal widely and leave most readers a little happier."

"This is an easy read, it is not a 'deep' book. It will suit some groups beautifully but if they're after a 'meaty' book, then this is not for them."

"A book for many audiences, it has both a feel-good quality and a very satisfying resolution."

"There were a few surprises in the book which I didn't see coming."

"I enjoyed Molly's character, but I enjoyed the other characters as well. They were interesting and well-drawn and seeing them through Molly's eyes was fascinating."