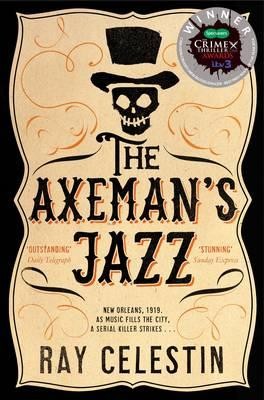 In the sultry Big Easy, with the music soaring, and the body count rising, Detective Lieutenant Michael Talbot is struggling to identify a killer, the jazz-loving 'axeman'. But he is not alone in his pursuit of the suspect - disgraced former detective Luca d'Andrea and an ambitious secretary from the Pinkerton Detective Agency, Ida Davis, are also hot on the trail.

Based on true events from 1919, this is a riveting story of pre-prohibition New Orleans, complete with the mafia, a trumpet toting Louis Armstrong and more.

Yes, well received and enjoyed by almost all of us. Good storyline, atmospheric and evocative of that age.

Well written, engaging characters in a complex plot, set in a fascinating place and time. We found that 'newbies' to crime fiction enjoyed the book despite it not being their favourite genre. The writer covered lots of bases - relationships, racism, history and mystery. Very entertaining.

The majority of the group enjoyed it - 6 out of 9, but 3 found it hard going and didn't enjoy the three lines of investigation. However, everyone got something from it - either historical facts, the origins of New Orleans or an insight into the life of Louis Armstrong. Generally would recommend.

Not one of our 'best' books, although after our discussion some of us found more to appreciate in it. It did offer an interesting insight into New Orleans' history and culture, but we didn't all find that the characters were convincing.

A wonderfully rich, dense and intelligent story with colourful characters (including New Orleans, the city) and plenty of plot forks that kept our group busy discussing it for hours. One of our favourites, and converted a few people to crime fiction too!

An extremely well written thriller, especially so, as based on a true story. Enjoyably read from cover to cover to discover 'who done it'! Such an interesting insight into life in New Orleans in 1919.

Everyone liked this book but to varying degrees. Cleverly constructed and well-written, it was engaging and intriguing, if gruesome. We liked what we learned was the "Rashomon effect" of investigation, and we felt all three detectives offered a credible line of thought and approach to solving the shocking murders. The characters were well-drawn, and we felt the author's linking of fact with fiction was very deft. One of the stars of the show was New Orleans itself, and another quirky "plus" was the inclusion of Louis Armstrong in the story.