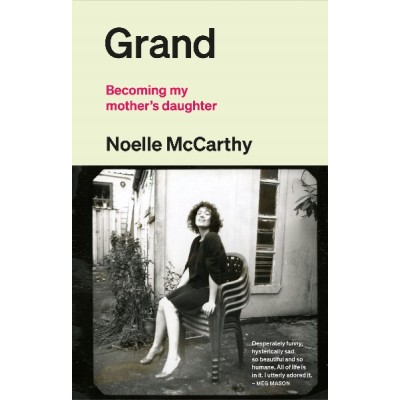 The debut memoir about mothers and daughters, drinking, birth and loss, running away and homecoming from prize-winning writer and broadcaster Noelle McCarthy.

Funny, charismatic and generous; angry, vicious and hurt; in pub lounges all over Cork City, Noelle McCarthy's mother Carol rages against her life and everything she's lost.

As soon as she can, Noelle runs away. All the way to New Zealand, to make a new, different kind of life. But then Mammy gets sick, and it's time to face everything that's waiting back home.

From Catholic Ireland in the '70s, '80s and '90s to sparkling Auckland in the first years of the new millennium, Grand is a story of the invisible ties that bind us, of bitter legacies handed down through the generations, and of the leap of faith it takes to change them. [Taken from book blurb, Penguin Books]

"It's a clever book - Noelle traces how she becomes her mother (figuratively), until finally she is able to claim being a daughter of her mother."

"It was interesting to read Noelle's eventual understanding of herself and her mother, and finding some peace with both.

"I thought the author was quite harsh and unforgiving towards her mother whose own life had been difficult."

"It was interesting that Noelle admitted in her afterword, that her siblings' relationships with their mother was quite different to her own."

"I think women would enjoy this more than men as it's a mother-daughter relationship."

"I enjoyed reading about the culture in which Noelle grew up - namely a poor Catholic Irish family."