An engaging and moving memoir. Virtually abandoned by her parents, Meredith is taken under the wing of her Grandpa. Her story is one of unconditional love and the healing power of nature.

Those who enjoy memoirs and especially coming-of-age, true stories.

When her parents divorced, Meredith was only five. Her depressive and emotionally distant mother handed Meredith and her younger brother over to her parents to raise and virtually took no further part in their upbringing.

Meredith’s Grandpa, while eccentric, was a kind and wise figure and he involved Meredith in his life as a bee-keeper where she accompanied him as he drove around Big Sur in California tending his beehives. As they harvested honey together in the dilapidated old bus on the back of his property, her gentle Grandpa taught her life lessons through the wisdom of bees.

Meredith May is now an award-winning journalist. Her lovely book is part-memoir and part nature story.

No criticism at all. The book makes the reader so aware of how one person can make such a difference in a child’s life. 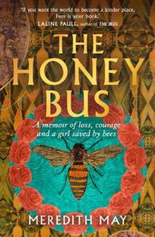 Barbara enjoys character-driven books and the opportunity to learn something; about cultures, countries or history.