A compelling autobiography about identity, family, and a country divided.

Political nerds, women, women of colour, and those interested in the concept of celebrity and fame.

Having only previously experienced Michelle Obama from a celebrity point of view, I quickly became captivated by this tale of an unassuming, but hard-working girl from Chicago who finds that the greatest 'success' in life comes from serving others.

The book is a warm and relatable read — and I quickly became attached to the Obamas in a way that made my reading slow to a dawdle toward the end of the book (I knew how it would end, but was hoping for a different outcome). I had been forewarned that books like this would include an element of political spin; that it could be a piece of democrat propaganda. I already knew myself to be left-leaning, so I tried to bear all of this in mind as I read, but at some point I either forgot to check my bias or had discovered a genuine voice whose only agenda was to express its desire for a fairer, more united country. If that's the Obama bandwagon I've jumped on, I'll happily ride it all the way to social justice town.

I got clued-up on the American political system, I googled Michelle and Barack's speeches, I researched what she wore to the inauguration balls — but I was also able to relate much of what I learned back to concepts closer to home. Michelle struggles with her identity: In traditionally white environments she is 'other' because of her blackness and in some black environments she is 'not black enough'. When she travels to Kenya to meet some of Barack's family, she is disappointed to find she doesn't feel connected to the continent of Africa either — she is 'other' here too. Growing up as a Pākeha New Zealander, I have benefited from absorbing through Te Ao Māori the importance of whakapapa/genealogy. I learned how to introduce myself as part of a connected line of people reaching back to my ancestral homelands. For most African Americans, these connections were completely severed during the slave trade — it's no wonder this violent displacement continues to pose issues for black identity.

This book made me feel a mix of hope and disbelief — how did the same country that voted for Barack, with his dream of a united America, vote for such a divisive figure in 2016? And what can we in New Zealand learn from this extreme swing?

In parts of the book the pace slows a bit, but this is still an overall very worthwhile read. 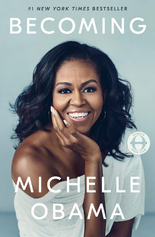 Renee's book group has reignited a passion for reading widely, but she’s particularly partial to well-written non-fiction that encourages her to view the world in a different way.