A compelling and spine chilling read that has you turning pages with a sense of dread.

Anyone who enjoys New Zealand Fiction will find themselves transported to the West Coast. The writing is so descriptive that you can feel the bush closing in around you — the mosquitos biting at your flesh, the drenching rain, and the searing sunshine.

Mystery lovers will also enjoy this book. How can a rental car holding two adults and six children just disappear without a trace? When the remains of the eldest child are discovered 32 years later, with his fathers watch and a tally stick, investigations show he lived an additional four years after the family disappeared. Where had he been? What had he been doing? How had he survived and then died?

I loved the descriptive writing in this book. As I turned each page, I felt I was there on the West Coast. Parts of it are very isolated with few people around, and you could easily get lost. I feared for the children — out of their depths in this strange environment — so unlike London in England from where they had emigrated.

There are two stories to be told in this book. The Chamberlain family, and Aunt Suzanne back in England dealing with the disappearance of her sister and family, from the other side of the world.

The characters of the book all had their own personalities. The children (Maurice, Katherine, and Tommy) and their different natures and ways of looking at things. How they go about surviving their ordeal in their own individual ways. Peters who rescued them (or did he?) Martha who cared for them in her own way. Aunt Suzanne (in England) looking for answers; her subsequent trips to New Zealand; her emotions. It's a page turner and an easy read. You want to know what’s going to happen but that feeling is tinged with a fear of the outcome.

I don’t have one. It was a great story and if you know the West Coast of the South Island – very believable. 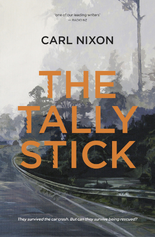 Lesley reads widely with her book group, but particularly enjoys character-driven fiction and is also drawn to compelling true tales.