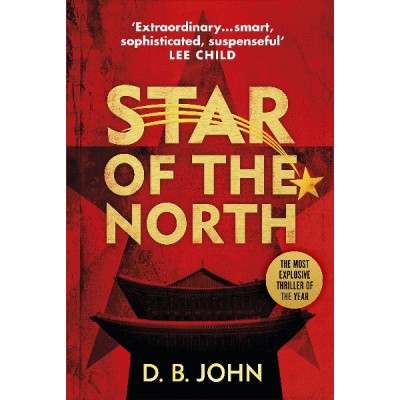 Star of the North

Buckle up for a white-knuckled ride where truth appears to be stranger than fiction. Inspired by real events, this suspenseful thriller moves between the USA and North Korea following twin sisters, one who mysteriously disappears from a South Korean island and the other recruited by the CIA to discover her whereabouts.

From its complex, chilling plot to its fascinating and sobering details about life in North Korea, this is a thought-provoking and revelatory read zeroing in on the Hermit Kingdom. [Small-medium font]

"This is a very fast-paced, exciting thriller. I read it quickly and couldn't put it down. An excellent book for men (and women)."

"The details about the life and times of North Korea are fascinating and horrific."

"Loved the book but admit to skimming over some details of the most brutal torture and deprivation."

"Especially interesting because it has non-fiction aspects to the story."

"I found it a little slow to start but I persevered and was rewarded with a great thriller."

"The book is much more than a thriller. It is a detailed examination of North Korea and the brutal regime that controls it."

"The main characters are very believable and I was very moved by the plight of those caught in the regime's web."

"As the book progresses we learn more and more about the depths of brutality that North Korea goes to in order to maintain total control of its population."

"A book of two halves and I preferred the first half. I thought there was too much thriller/car chase/movie plot in the second half."

"There is violence in the gulag which is pretty ugly. In fact there is nothing comfortable about the whole country - but it is topical."

Our men's group quickly finished this book. The narrative is exciting and easy to read, and has a number of twists and turns. As you read you are constantly amazed at the deceptions and the survival abilities necessary just to allow the characters to keep on living. After reading we were keen to find out more about the real stories out of North Korea.