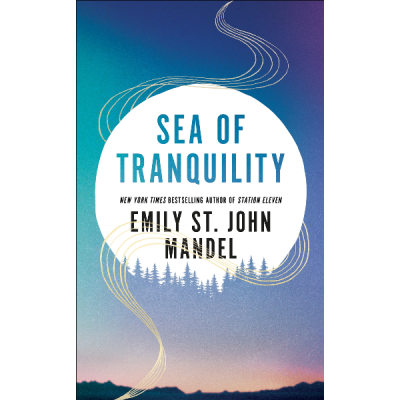 In 1912, eighteen-year-old Edwin St. Andrew crosses the Atlantic, exiled from English polite society. In British Columbia, he enters the forest, spellbound by the beauty of the Canadian wilderness, and for a split second all is darkness, the notes of a violin echoing unnaturally through the air. The experience shocks him to his core.

Two centuries later Olive Llewelyn, a famous writer, is traveling all over Earth, far away from her home in the second moon colony. Within the text of Olive's bestselling novel lies a strange passage: a man plays his violin for change in the echoing corridor of an airship terminal as the trees of a forest rise around him.

When Gaspery-Jacques Roberts, a detective in the black-skied Night City, is hired to investigate an anomaly in time, he uncovers a series of lives upended: the exiled son of an aristocrat driven to madness, a writer trapped far from home as a pandemic ravages Earth, and a childhood friend from the Night City who, like Gaspery himself, has glimpsed the chance to do something extraordinary that will disrupt the timeline of the universe. [Taken from book cover, Pan MacMillan Books]

"The mystery at the heart of the story is intricately woven through and not resolved until the end of the story - making it compelling reading."

"The author manages to make you care about each of the characters intimately."

"It was incredibly easy and quick to read but the subject matter felt rich and personal."

"Compulsive read with heaps to discuss." "Pandemics - past, present and future - feature in a matter of fact manner, making this a topical story."