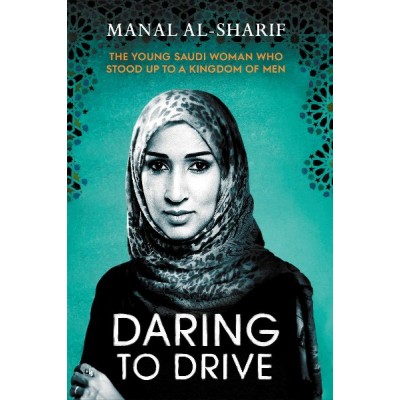 Charged with 'driving while female', Manal al-Sharif was arrested and imprisoned in 2011 for daring to drive in Saudi Arabia, a nation that did not allow women behind the wheel. But with YouTube and social media to the rescue, her rebellion hit the headlines, spearheading the now internationally publicised Women2Drive campaign.

From her deeply conservative upbringing in Mecca to her trailblazing I.T. career, this is a compelling memoir from a courageous activist that sheds light on an oppressive and patriarchal society, poised on the cusp of change. [Larger font]

A surprising book! So much to learn about women in Saudi Arabia and how life is for them. Contradictions galore. Such a strong woman!!

Grim to read of the day-to-day reality for Saudi women. Important and interesting topic; many found the writing style impersonal.

This is powerful non-fiction that shines a light on the lives of women in Saudi Arabia. We were unnerved by the level of domestic violence and suffocating oppression described in the book. Some of the group found it difficult to read, but at the same time were impressed with the courage and dedication of Manal al-Sharif in her role as an activist for women's rights. The quality of writing was a bit ordinary, but it is a compelling narrative so that didn't matter really. The book generated a great deal of discussion.

All agreed we're glad we live in a democracy with equal rights to men. We were shocked by the level of domestic abuse in Saudi society, and found the descriptions of life for women and children very unpleasant. Some found it difficult to read while others found it informative.

We found this a revealing and disturbing insight into the life of women in Saudi Arabia.

All felt this as good insight into life in Saudi Arabia, but many found it an emotionally difficult to read.

The general feeling of the group was that it was hard to get emotionally connected to the author over her struggles to change rules for women in Saudi Arabia. However, it was very informative in bringing publicity to the plight of women in her country (maybe written by a ghost writer?).

Most of us found it a very astonishing and gruelling read of the incredibly cruel and violent Sunni interpretation of Muslim religion. A very brave and amazing woman.

Members found this book fascinating while at the same time horrifying! Well-written; we were all in awe of the author.

Everybody who read it found it a very good read. Thought provoking and informative.

The general consensus was that it was an eye opener in so many ways. Some were amazed while others are still wide eyed!!! It was great that the author went back and set the scene of her childhood and life. It is such a contrast to our own lives that we can't fathom how women manage to live their lives with so many restrictions.